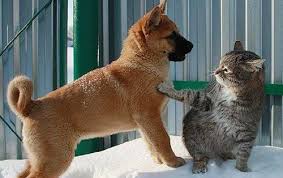 Like the cat in this picture, I’m sure at some time or another we’ve all experienced an invasion of our personal space – you know, that physical space immediately surrounding our body.

What about your characters? How do they feel when another character enters their personal space? The answer will depend on the relationship between the characters. A young child climbs into her grandmother’s lap for story time. A father holds his child’s hand or picks him up when walking together. A husband rubs his wife’s shoulders. A girl snuggles with her boyfriend while watching TV. In each of these examples, the other person doesn’t feel his or her personal space has been invaded because a familiar intimate relationship has already been established between the two people.

However, characters with a desire to create an intimate relationship won’t automatically cross this invisible barrier with the object of their affection. Like real people would, they slowly test the other person’s personal space and evaluate the response based on verbal and nonverbal cues (body language). For example, as the hero and heroine banter, she moves closer to him. He doesn’t back away. She takes this as a good sign and touches his arm. And so on…  You can create page-turning sexual tension as your characters figure out how to cross into the other person’s personal space. Your scene might start off with a gaze from across a crowed room (or something less cliched) and progress to “Leaning”.  For a definition of leaning, and a great example of increasing sexual tension by crossing into personal space, watch this clip from While You Were Sleeping.

What will your character do when a drunken guy gets into her personal space in a bar? Hopefully she’ll tell him to back off while she physically steps back and raises her open hands up in front of her creating space between them. If he backs off, great. She can enjoy the rest of her night. If he steps into her personal space again, she knows this guy (the villain perhaps?) is not harmless. A nice palm heal to the nose might do the trick (which is the other reason her hands went up in front of her. It might appear as though she merely created space, but her weapons were ready if she needed to strike). Of course, the scene will be shaped by your characters’ personalities. Would she run away, strike him, call for help?  Would he chase her, block her strike and counter it, pull a knife or a gun?

Showing your characters’ interaction around and within each others’ personal space reveals character personality, establishes relationships, demonstrates intimacy or lack thereof, and increases tension – sexual or otherwise.

What else does personal space reveal to the reader? What are your favorite scenes (books or movies) that demonstrate crossing into personal space? Do you think about your character’s personal space and their reactions to someone getting too close?

This entry was posted in Writing Tips and tagged intimacy, KM Fawcett, Leaning, personal space, Tension, While You Were Sleeping, writing. Bookmark the permalink.

One response to “Increasing Tension Through Personal Space”